There are so many things that make Liverpool the beautiful city that it is, and street art is becoming a growing part of this. Not only do they brighten up dull walls, they also make for the perfect Instagram snap!

For art-lovers, gone are the times when the only place to see spectacular pieces of art work is in the Tate or The Walker Art Gallery – why go indoors when there are galleries painted on the walls of the city centre?

With new murals and graffiti appearing each day in Liverpool, it’s hard to keep up! We’ve put together some of our favourite and most Instagram worthy street art currently in the city. If you’re planning an Insta Graffiti Crawl – we’ve even included how far they are from Base Serviced Apartments.

If you spot any murals we’ve missed during your #staywithBASE, make sure you tag us at @baseapartments!

“However difficult Life may seem, there is always something you can do and succeed at”, my oldest son posing in front of my Tribute to Stephen Hawking spraypainted at Contrast Mural Festival @contrastmuralfest in #Liverpool, this mural was painted on the wall of a Science school, I hope this piece will inspire the students and the local community, being a scientist myself it was a personal choice to paint a Tribute to such an inspirational person, swipe to see the piece without the kid spam 😅 credit: inspired by original photograph by Bruno Vincent #akse #p19 #graffiti #art #streetart #fanart #stephenhawking #science #scientist #blackhole #universe 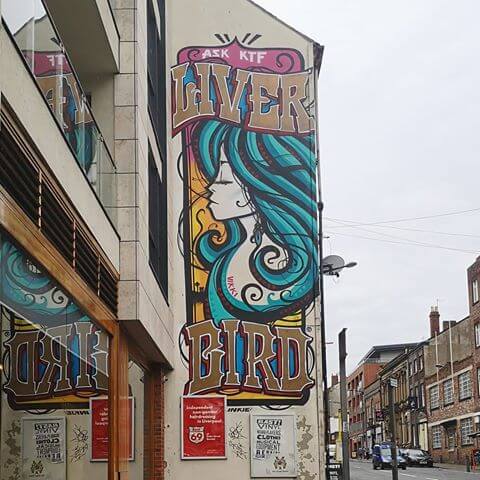 More street art from the Contrast Mural Festival is the stunning ‘Liver Bird’. The funky bright piece is one of Liverpool’s newest additions and can be spotted on Duke Street next to The Brunch Club.

Try not to moonwalk past this piece! This unique piece of art is influenced by (you guessed it), Michael Jackson’s Smooth Criminal video. The artwork is a tribute to the late performer’s amazing dance moves, in particular – that moonwalk.

4. Avocado is Bae at Love Thy Neighbour Restaurant. (3 Minute Walk from Base Duke Street)

Just a stroll around the corner on the side of Love Thy Neighbour Restaurant, is the ever so millennial statement ‘Avocado Is Bae’. The most instagrammed food featured on an instagrammable piece of art. It couldn’t get more millennial if it tried. 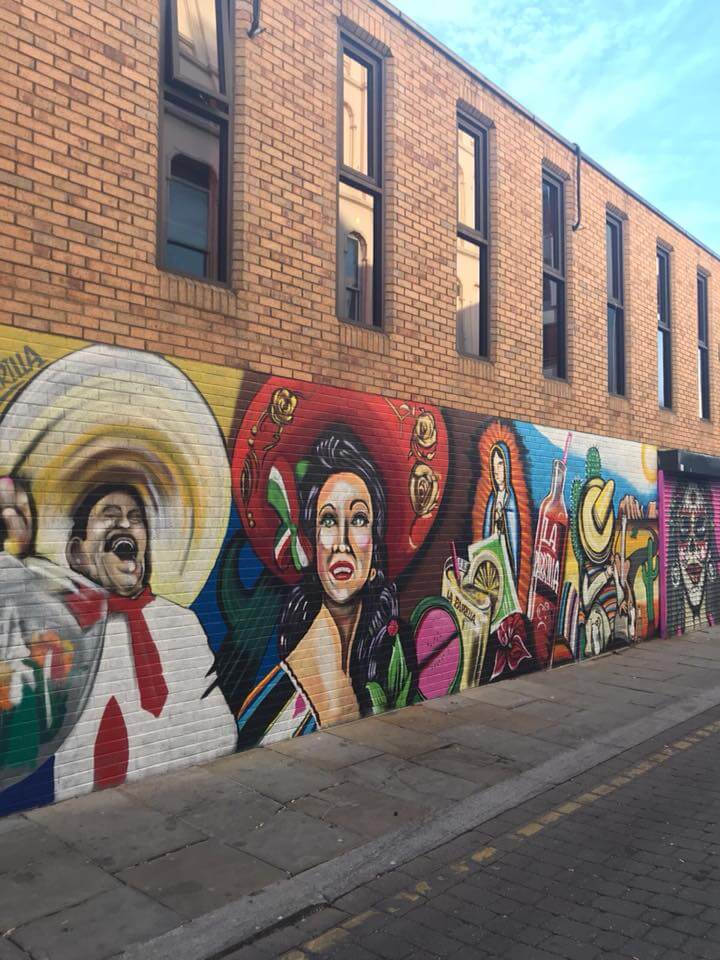 This bright, detailed design can be found just off Bold Street at the side of La Parrilla Mexican Bar & Grill, and makes for the perfect Insta snap. Look out for the Mariachi singer standing out front!

Continuing down the route of Latin American themed street art, check out this rustic piece in the beer garden of Alma De Cuba. Snap a selfie and enjoy a cocktail in the sun under the bright walls.

7. The Banksy Style Mural on Jamaica Street. (9 Minute Walk from Base Duke Street) 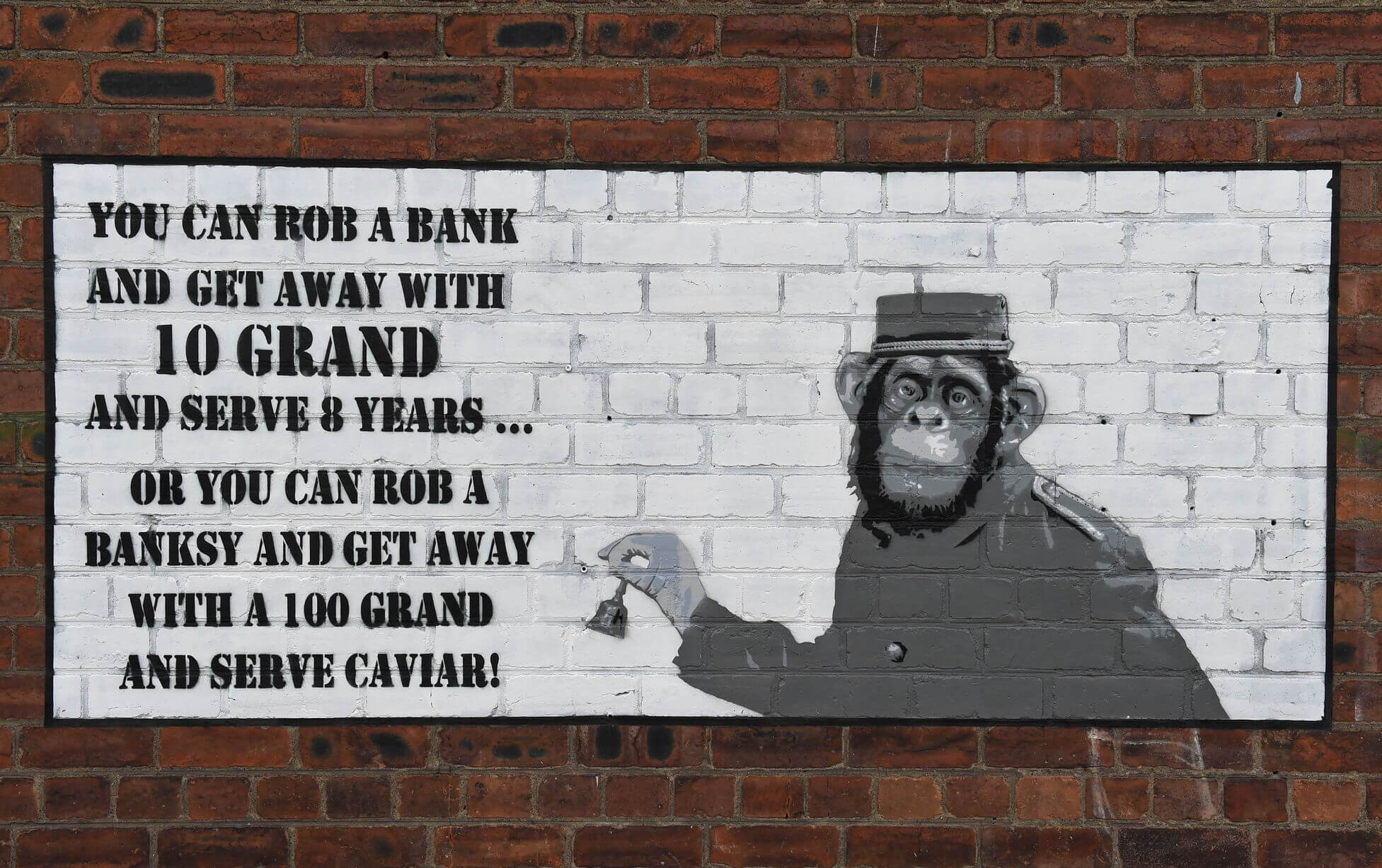 A little on the controversial side, this Banksy style piece makes a dig at the number of original Banksys that were removed around Liverpool and sold to private collections. Many believe that the street art could have been created by the anonymous artist himself. Who knows!

8. For All Liverpool’s Liver Birds by Paul Curtis on Jamaica Street. (9 Minute Walk from Base Duke Street)

Another piece and probably his most famous, are the interactive Liver Bird Wings by Liverpool born artist Paul Curtis. Paul’s piece hit off a few years back and has since attracted 1000’s of visitors and even made the national press.

9. Large Piece at Santa Chupito’s by Elphone. (3 Minute Walk from Base Duke Street)

Here’s the finished wall I painted alongside @mrteaone at @contrastmuralfest in Liverpool. It’s at the back of @santachupitos off Slater Street. Thanks to @brink_liverpool and @AlmostFamous.UK for keeping us fed and watered. @trenchone painted on the same building just around the corner. It was all made possible by @zapgraffitiliverpool. Cheers @betarok75 ! – Will need to got back down and actually have a good look around at all the painting that took place, it was too much to see in one weekend. . . . . . #zapgraffiti #artinliverpool #absolut #artinliverpool #elph #manystylescrew #エルフ #muralart #abstract #collaboration #montanablack #artistsoninstagram #elphism #portrait #linedrawing #watercolour #elephantstoothbrush #halftone #cityscape #festoonlights #gableendmural #boomlift #exposedwires #scarf #layering

Street artist Elphone created this vast piece as part of Contrast Mural Festival. The intriguing mural stands out on the corner of Santa Chupito’s restaurant.

Base Tip: Head inside Santa Chupito’s and try one of their famous $5 Shake cocktails. You’ll thank us later.

A little further afield (if you fancy a bit of a walk) at Stanley Dock is this giant homage to The Beatles ‘Four Lads from Liverpool’. The vivid image shows the band members against a colourful backdrop.

11. The Lady on the Tempest Building, Tithebarn Street. (4 Minute Walk from Base Cumberland Street)

This mammoth mural, created by an all-female crew, symbolises the struggles and growth of start-ups in the city. It took over two weeks to complete and can be found at HUS bar on the same street as the Super Lambanana – If you don’t know what this is, look it up.

Left to right Louie, Queenie, Zoe, Siena, Dillon and Otto. All out mucking around in Liverpool opposite the Royal Hospital.. #rudekids #stencil #streetart #streetarteverywhere

The Banksy style artist has created a series of #rudekids that are out and about mucking around in Liverpool. Spot them all opposite the Royal Hospital and look out for one of them hanging out on the corner of Parr Street.

Planning a trip to Liverpool? Find out which Base Apartments location is best for you here.